GREEN ARCHITECTURE: THE FLOATING CITIES OF THE FUTURE

The Seasteading Institute, an organization that imagines innovative societies of the future, recently launched an architectural design contest called “The Floating City Project.” They’re accepting entries of renderings depicting sustainable floating metropolises that could one day become a practical reality. The institute’s ultimate goal is to select a location in calm, territorial waters of a host nation for what may be the world’s maiden city at sea. First, they’ll review graphics of the participants’ initial propositions, which are due June 1st, and many of them might be inspired by some of these renderings already out there on the web. Here are four futuristic floating cities already dreamt up by some forward-thinking architects from around the world: 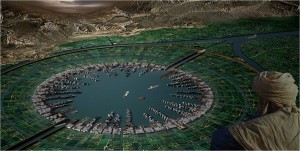 A floating “hydropolis” with a focus on flood control in the Nile Valley, “Silt Lake City” would be located on Lake Nasser, Egypt—one of the largest man-made lakes in the world. The Marion Ottmanproject proposes dividing the water body into floating modular cities that could “ride” the tides during flood season. The cities, structured by a hydrological system, would converge toward the center of the lake and include agriculture, residences, businesses, and energy generators.

Created in the shape of a water lily, the “Lilypad” is a series of zero-emission floating communities that could house approximately 50,000 people on any water body. The self-sufficient, mixed-terrain landscape is powered with renewable energy and is envisioned as the future home for climate change refugees. Vincent Callebaut Architectures dreams these cities will rise by 2058. 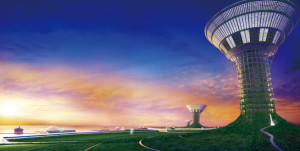 Concerned with typhoon conditions, a Japanese firm called theShimizu Corporation concocted this equatorial, bustling and botanical city that would mostly be powered by sunlight, and exist far from the threat of strong winds. The residential zone would house 30,000 residents, while the industry incubation office would be a work zone for 10,000 people. All waste would be recycled and utilized as additional energy sources, and there would be no burden on the environment whatsoever. The design team even included evacuation measures in their outline.

This collection of artificial islands, called Harvest City, is set in a futuristic Haiti and was designed to counter the effects of large earthquakes and hurricanes. Tangram’s city would consist of tethered floating modules and could be home to 30,000 residents. The overall design is divided into four zones or communities interconnected by a linear canal system with the center of the metropolis dedicated to urban functions like office space, education and light industry, and the outer areas comprising of agricultural homesteads.