On Tuesday, November 29, EPN sat with Mr. Warren Black for an Interview to learn more about the history and success of VR Quest™. VR Quest™ is an educational project-based learning model that integrates fully-immersive virtual reality technology.  VR Quest™ students work as a team to create a virtual reality multimedia environment. Students develop a vested interest in their project by becoming an integral part of a production crew and creating their own virtual worlds. Upon completion of the project, students enter their worlds via a head-mounted display and interact with their creations. Students own the games they build and may play them on their home computer without purchasing software and at no additional cost. Interested readers should check out the list of schools and after-school programs where VR Quest™ is available at the end of the article. – EPN 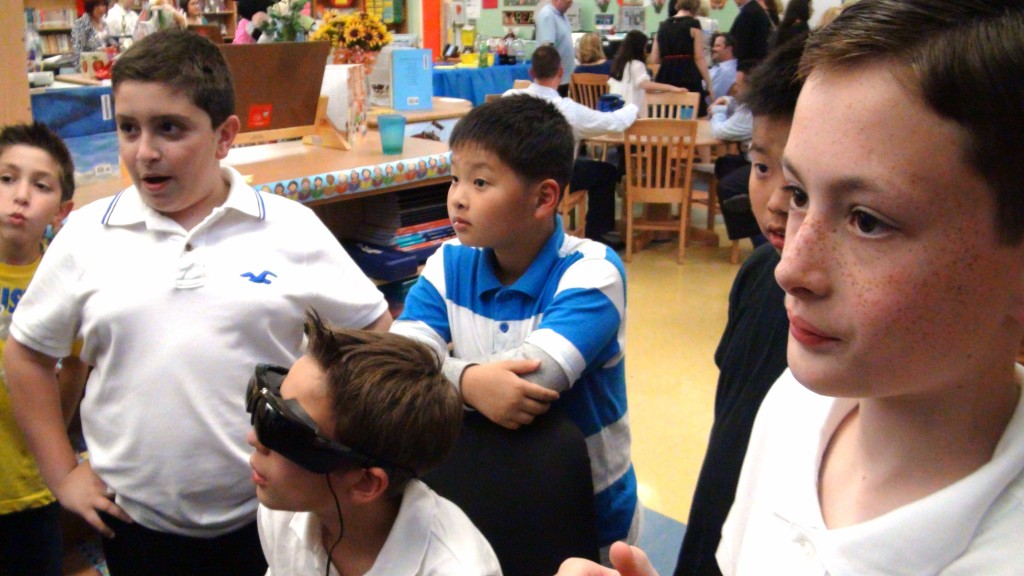 EPN:  Congratulations Warren, tell us how you got started and how you came up with the idea for VR Quest™?

Warren:  The idea for VR Quest™ came from my belief that if 97% of all kids played video games, then students could create their own computer-based video games in schools. I felt that there had to be a way for kids in the primary grades, middle and eventually high school students to fulfill S.T.E.M. and common core outcomes using game design. What makes our solution so special is the use of virtual reality, commonly known as “VR”. VR-based training has been tried before, but mostly for military applications. Integrating VR with school curricula had never been accomplished until the integration of VR Quest™. The reasons were the economics (i.e. the cost of the equipment), low bandwidth, complexity of software with regard to rendering environments, and the lack of a business model that would be welcomed by after-school programs and educational Institutions.

Over time, I discovered how to overcome these challenges by experimenting with different software, hardware, and by creating a business model. Development of the business model turned out to be the most difficult: getting teachers and schools to accept new technology isn't easy. One reason for this is that educators have existing content and curricula which has been embedded into the lessons. Only in the last two decades has digital curricula made inroads into traditional curricula, so as I mentioned, the business model was the most difficult part of this.

Also, the training of teachers is paramount to the integration of new technologies. Children and students of all ages naturally welcome new technology, but teachers on the other hand (who are generally overworked) have difficulty finding the time to train in the use of technology. So that was one of the largest hurdles to overcome, namely, having teachers accept VR Quest™.

EPN: Do you have a history of business and entrepreneurship in your family?

Warren: No, I do not!  To be honest, I was fortunate to learn about virtual reality while training for my Master’s Degree in Multimedia Computer Application and Art at San Jose State University.  While working as a waiter putting myself through school I hurt my hand, an injury that prevented me from doing my job. My professor asked me to take an internship at the University of Washington‘s Human Interface Technology Laboratory. There, I learned about virtual reality applications that were quite primitive by today’s standards.

One day, while walking down street in San Francisco, I saw a virtual reality demonstration where business people were playing “shoot-em” up style games. I had a moment of inspiration and I seized on the idea that this could be used for education, so I called up the owner of the company that made the VR head-mounted displays and after a month of persistence, he agreed to meet with me over dinner. At that meeting I told him that I was going to put virtual reality game design into a school. I had no idea how I would do it, but he believed in me and gave me the displays I needed. After that, I went to the school board in San Mateo to offer the program as a pilot, but we didn’t have any computers, so for three months I called and wrote letters to the president of HP home products. Eventually, he gave me just 30 seconds of his time. When I told him what I planned to do he was dumbfounded. I said that I would make HP the first computer company in the nation to help implement VR based education.  His response was “What do you need?” and the very next day five HP computers were delivered to Bayside Middle School in San Mateo!

I used the same approach with Autodesk and they gave me 3D Studio Max software. Over the next year the students in their Earth Science class built games based on the four Greek elements of fire, earth water and air.

Finally, in 1996, I held our first press conference and we appeared on national TV.

EPN:  WOW! Your tenacity paid off! So tell us, what keeps you motivated?

EPN:  What will VR Quest™ look like in five years? Ten Years?

Warren:  In five years or less, I anticipate the creation software will be completely web-based. Presently, the software cannot be accessed online, but we are close. So imagine VR Quest™ living in the cloud and students creating and sharing games with anyone else in the world in real time. I imagine that in ten years we won't even need to use the glasses anymore – we’ll probably be able to employ some type of holographic display.  What I would really like to see though is an expansion of content and how it is delivered – I think holograms will exist, and being able to manipulate objects in 3D is great, but as it turns out the most important thing is the content. What really drives the success of VR Quest™ are the project modules. In other words, as the creation and delivery methods become more effective, what we choose to teach students will become as important as how we teach them.

Warren:  Building models and functionality that support content is ultimately what VR Quest™ is about. We have the ability to render environments and view them in 360 degrees, but how we design the models to help the students create is vital. So for example, we can use VR Quest™ to teach kids about water molecules, how they are formed, the fact that they have two hydrogen atoms and one oxygen atom, the shape of them, etc. but, in New York City Department of Education, where sustainability outcomes are part of the common core, we will have students build a game to create a water molecule then have students create a game in which players have to recycle water and keep it clean.

There is no limit to what students can create. It’s important to remember, though, that there are no pre-existing games here: the students have to create their own games with their own outcomes so it is vital that the teacher or facilitator uses teaching processes that lead to the learning of common core outcomes in student game design,.

EPN:  Tell us some of the obstacles you encountered as you worked to take VR Quest™ to where it is now.

Warren:  The biggest obstacle was my own fear and of course the fear teachers and administrators have of accepting the product.  Fear is what keeps anyone from doing anything. I have no fear anymore. I don’t take for no an answer.  My focus is to put this new technology into the hands of students and teachers. I know from experience that when they see VR Quest™ for themselves and how effective it can be, they will accept it. There are always a set of priorities that drives educators, and I as an entrepreneur, have to understand those priorities to allay the fears of teachers, educators and administrators.

EPN:  Tell us about your leadership style.

Warren:  I lead by example. The most important thing I have learned in my career is love and acceptance. I don’t judge anyone for their opinions. I have not earned that right to judge. As a leader, I think the physical actions you take are the example you set for others: never show up late, always follow through on everything, and always be prepared. If you can follow those simple steps then there is no task that you cannot accomplish.

EPN:   Having said that, what was the biggest risk that you have taken on your journey?

Warren:  I earned a lot of money in another business, and I took all of it, cashed in my 401K, sold my Porsche etc., and I put everything I had into what I believed in. I don’t recommend that to everyone, but because I had few responsibilities at the time I felt that it was an important enough opportunity to take the risk, but it was a calculated risk. The old adage “If there’s a will, there’s a way” is true: I feel that you want something bad enough you will find a way to make it happen.

EPN:  Who is or was the most influential mentor in your life?

Warren:  Without question that would be Mother Teresa.  I had the great fortune to work on the film crew of the movie “Mother Teresa”.  As part of the project and to understand her work we were required to spend time working in her missions here in New York. Much of the work I did was not about filmmaking but about learning Mother Teresa’s message of humility and service. There can be no more powerful image of humility than to see Mother Teresa, a Nobel Prize winner, in Harlem on her knees cleaning a toilet. What she taught me is that it doesn’t matter who you are or what type of job you do, you give it your best. People think entrepreneurship is about money but it's really about your ability to persevere and do hard work, which is the basis of all success.

EPN:  What is the most important advice you can give a young entrepreneur looking to get into virtual reality technology?

Warren: Always be prepared and never ever, ever give up.

The following is a (growing) list of schools and after-school programs that offer VRQuest-based learning: