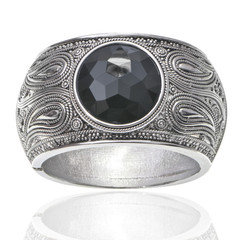 Fashion and accessories designer Perline “Pearl” Naidoo is a woman of color from of South Africa whose exceptional talent has elevated her far above her most vivid dreams. The Pearl Naidoo jewelry collection consists of one of a kind designs inspired by her Indian roots and her South African upbringing. Each piece is rich in symbolism, bold in style and affordable to wear.
Born into a creative family, Pearl always had an interest in fashion, especially beautiful pieces of jewelry. At the tender age of 18, Pearl Naidoo left her home and everything she knew in South Africa and made her way to the U.S.A. With no formal training or education in jewelry design, she learned by observing and spent countless hours, days and nights practicing her craft. It was in October of 2009 that her hard work paid off and she broke into the fashion industry when she met celebrity designer and stylist Kythe Brewster. Mr. Brewster noticed Pearl's talent and knew that she could excel in the fashion industry so he offered her an assistant position where she learned the in’s and out's of fashion. During this time, she met celebrity Tony Cohen, and went on to work with other entertainers and high fashion models including, "The Real Housewives of Atlanta" Cynthia Bailey, JoJo, Lucy Liu, Beyonce and Raye 6, to name a few.
Since the official launch of the Pearl Naidoo Jewelry Collection, her designs have been featured in publications such as Fuzion Magazine, the Latino Show magazine, Vogue Italia, Fashion Avenue Magazine, and I-Fashion Magazine. In February of 2013, during New York Couture Fashion Week, her DENKAY clothing line was launched, expanding and elevating the Pearl Naidoo brand to new heights.

The majority of her business efforts are paired with a charitable cause, including She’s the First, Seeds of Peace, Step it up Africa, Glamour Girls in the City and Women's Worldwide Initiative, to name a few. From publication and Fashion Week Runways; NYC, Columbia, Brazil, Dominican Republic, Turks and Caicos, Jamaica, Australia, and more.... The Pearl Naidoo Brand will always be synonymous with elegance, success, and integrity.