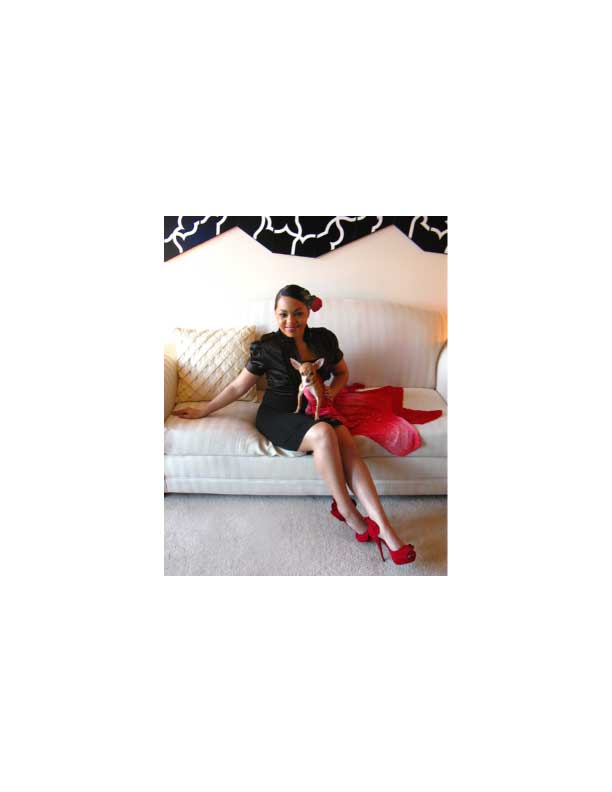 Katiria has been in the fashion business now for  about six years.  EPN recently gain insight into her inspiration for her special designs for canines!   Quite an Amazing Story!

EPN:  Tell us about how you came up with this fantastic idea for such unique designs for canine?  What was your inspiration?

Katiria:  Four years ago I got my teacup chihuahua, Precious Princess. Tiny breed dogs, or "tea cups" as they are popularly known, hold a very special fascination for many people as they really do for me! From the very first moment with her I realized that there was something much more to Princess than just being a "teacup". She was, and still is, so adorable that I couldn't help but spoil her with anything and everything that I thought added to her cuteness.  I even began searching for clothing for her and rapidly learned there wasn’t anything for her tiny two-pound frame and that there really isn't much of true fashion value out there at all for canines.  Cuteness isn’t an accurate gauge of her character, I soon realized that she was extremely intelligent  and sensitive, more so than I could have ever imagined. I started making little outfits  for her and that's when I saw her as the inspiration for my true approach to real canine fashion. It even became evident that Princess recognized her own potential in these designs. Put her in and out on the runway, she expresses that design!  At that point, I became determined to become a fashion designer for tiny breed dogs. Shortly thereafter I coined the name for my clothing line, TinyVogue! Only then did I realize how important this business decision was to me as a serious fashion designer.

EPN:  We are curious about your first collection "stringkinis"  which we had the honor of viewing two years ago at the launch of your line?

I was very honored that EPN came out to Boston to my first fashion show!  It was a pleasure to have you!  My first collection was inspired by Brazil. I began experimenting by creating ‘stringkinis’ with very vibrant and exciting colors. I now needed feedback and during the Summer of 2009 I took Princess in her stringkini to Block Island. Wow! What a response Princess in her stringkini got strutting through the crowds like she was the diva that she was later to become. I was speechless, but I didn’t have to say anything TinyVogue spoke for its self and Princess’s magnetic character and energy created an unbelievable starstruck crowd. For entire island visits she attracted so much attention, that I often heard people refer to her as "The Bikini Dog". She loved the cameras and all the comments. I felt humbled and blessed for the overwhelmingly warm reception.

EPN:  How does Princess handle all the media and overwhelming attention from the Public?

She is handling it vey well!  She actually loves it!!  During the two times I attended the 2011 and 2012 Pre-Westminster Fashion Show in NYC , Princess took unprecedented public and media attention forming another critical aspect of TinyVogue's unique fashion statement.  A month later Princess won second place in the New York City Pet Show. And thereafter, Princess and I have been invited and attended several charity events at which she continues to draw lots of attention to the TinyVogue line.
At the end of 2012, I put on my first fashion show, “TinyVogue’s 2012 Spring Stringkini Collection” and the audience responded in overwhelming applause recognizing my work enthusiastically!

What should we expect next from Tiny Vogue?

I am in the process of developing another fashion show inspired by the Carnival spirit. My entry into the fashion industry was very unconventional and my fashion career continues in the same way!