What can we learn from him?

Richard Branson had dyslexia and poor academic performance as a student, but he later discovered his ability to connect with others and is now worth over 4.2 Billion Dollars!

Sir Richard Charles Nicholas Branson was born on July 18, 1950,  in Blackheath, London, son and eldest child of barrister Edward James Branson and Eve Huntley Branson. Branson attended Scaitcliffe School until the age of thirteen, then attended Stowe School until the age of sixteen. As a student, Branson had poor academic performance and  dyslexia. However, that did not stop him from becoming one of the richest man in the world, the 4th richest citizen of the United Kingdom, according to the Forbes 2011 list of billionaires, with an estimated net worth of US$4.2 billion.

How did he do it? What was his drive?

Sir Richard Branson started his career as an Entrepreneur at the early age of 16, from the crypt of a church, with his first business venture, a publication called "The Student Magazine" where he advertised popular records. That was a huge success!

In 1970, Sir Branson established an audio-record mail-order business, trading under the name "Virgin", a name that was suggested by one of Branson's early employees because they were all new at business. He sold records for much much less than his competition, despite the fact that many products were sold under restrictive marketing agreements that limited discounting. Branson once said, "There is no point in starting your own business unless you do it out of a sense of frustration."  Branson started the series of changes that led to large-scale discounting of recorded music.

In 1972,  Branson used the money earned from his record store to  launch a chain of record stores, Virgin Records, that later became known as Virgin Megastores. His Business Partner at that time was Nik Powell. Branson also bought a country estate, where he installed a recording studio. He rented out studio space to emerging artists like multi-instrumentalist Mike Oldfield, whose debut album Tubular Bells (1973) was the first release for Virgin Records'. It quickly became a chart-topping best-seller. 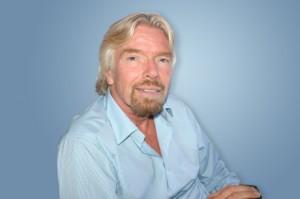 In the 1980's, the world witnessed the successful growth of Sir Branson's Virgin brand while  he set up Virgin Atlantic Airways and expanded the Virgin Records music label. Controversial  bands such as the Sex Pistols, which other companies were reluctant to sign, were picked up by Virgin Records. The record company under the leadership of Branson also won praise for exposing the public to such obscure avant-garde music as Faust and Can. Popular band Culture Club was also introduced by Virgin Records to the music world. In the early 1980s, Virgin acquired the gay nightclub Heaven.

In 1991, in collaboration with David Frost,  Branson had made bid for three ITV franchisees under the CPV-TV name. That proved to be unsuccessful. Sir Richard Branson also attempted tobecome a producer in the early 1980s on the novelty record "Baa, Baa, Black Sheep", by Singing Sheep in association with Doug McLean and Grace McDonald. The recording was a set of sheep baaing along to a drum machine produced track. That only made it to number 42 on  the charts in 1982.

Finally, 1992, Sir Banson sold the Virgin label to EMI for £500 million to keep his airline company afloat. Branson admitted that he cried when the sale was completed because the record company had been the birth of his Virgin Empire. BransonHe later formed V2 Records to re-enter the music business.

In 1984, Branson formed Virgin Atlantic Airways. He launched Virgin Mobile in 1999 and  in 2,000, Virgin Blue in Australia, presently named Virgin Australia. Sir Branson  wrote in his autobiography of the decision to start an airline: "My interest in life comes from setting myself huge, apparently unachievable challenges and trying to rise above them...from the perspective of wanting to live life to the full, I felt that I had to attempt it."

Read part 2 of our series on Sir Richard Branson in our next issue of EPN Magazine.