The holiday season is upon us! No doubt your calendar is already filled with parties, company holiday outings and that means entertaining endlessly for the next few weeks …

You will spend more time than usual with colleagues, clients and bosses, however there will be little or no business discussed, comfortable and relaxed atmosphere is a must at a holiday event! After exchanging pleasantries, what will we talk about? Choosing the right topic is highly important, as it will not only keep the conversation flowing, but can also be used as a chance to impress your client or boss.

It’s a well know fact that Real Estate is one of the most popular conversation topics in any city around the globe, and in New York City you'll inevitably end up talking about it every time! Fluctuating housing prices, investment opportunities, mortgage rates and which neighborhoods are up and coming…

We have selected 3 most interesting things that happened in NYC Real Estate this month. 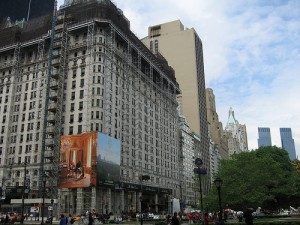 The area, which runs east from Central Park past ritzy Park Avenue apartment houses to the East River, and north from 60th Street to 69th, is home to such plutocrats as David Rockefeller, Rupert Murdoch, Ronald Perelman, Robert Bass and Sumner Redstone. More than 50 condo units with price tags running to seven figures or higher and the median asking price for homes in 10065 is $6.5 million - land the Upper East Side enclave in the top spot on Forbes’ annual list of the Most Expensive ZIP Codes.

Uptown around Central Park, a flurry of record-breaking sales, including an $88 million apartment at 15 Central Park West and $90 million-plus pending sales at up-and-coming skyscraper One57, have brought a flood of would-be trophy properties to market (including four apartments listed at $95 million-plus). Eight park-hugging ZIP codes made our list.

“Manhattan’s market is frothy right now,” says Dolly Lenz, vice chairman of Prudential Douglas Elliman Real Estate. Wealthy foreign buyers looking to make safe-haven investments have helped to elevate prices; a booming U.S. technology sector and renewed interest in vacation homes have been strong contributing factors as well. Many of the world’s new wealthy are looking for places to park their money and despite the economic uncertainty, the pattern is to buy and hold property in the U.S.

That brings us to the next topic:

Foreign buyers have flooded the U.S. housing market taking advantage of favorable exchange rates, weaker prices and in some cases, record-low mortgage rates. More than 50% of sales over the past year occurred in just five states: Florida, California, Texas, Arizona and New York.

Russian billionaires have been making headlines for snapping up some of the most opulent homes in the United States: $100 million Silicon Valley mansion, $88 million penthouse in New York City… This week, an anonymous Russian buyer plunked down $47 million in Miami’s most expensive sale ever. But Russians certainly aren’t the only foreigners plowing money into American real estate. The reason Russians get so much attention is that they buy the highest ticket trophy properties, but if you go by number of buyers, you have much more activity coming from places like Argentina, Brazil, Colombia and Venezuela.

The market in downtown Miami has been principally dominated by Argentineans, then Brazilians, then Venezuelans. Increasing numbers of Venezuelans are pouring money into American real estate, seeking a safe haven for their wealth from political and financial uncertainty back home. They seek out rental units - the new landlords in Florida are South Americans and their tenants are Americans. The real attraction in South Florida is cheap, cheap, cheap waterfront real estate: these buyers look at this and think it will never be as cheap again. Given the uncertainties of the European Union’s fiscal crisis, many wealthy Europeans are desperately trying to shed their euro zone homes and reinvest that money in American real estate. They typically want new construction, particularly condos, that they can use as pied-a-terres.

Chinese are also shopping in the U.S. in growing numbers. Buyers from mainland China and Hong Kong account for 11% of international sales activity, according to National Association of Realtors, making them the second-largest foreign buyers of U.S. homes. The influx of newly minted millionaires has inspired developers to reserve units on floors with the number ‘eight’ in new condo projects for Chinese buyers (Chinese consider eight to be a lucky number), and real estate brokers are embarking on overseas marketing trips.

If the Chinese are the second-largest foreign buyers of U.S. homes, then who is No. 1? Our neighbors in the North - Canada. Canadians accounted for 24% of sales to foreigners, according to NAR. They have been a dominant purchasing force in Sunbelt states like Arizona and Florida. A relatively weak greenback coupled with low home prices represents an opportunity to scoop up a home that could be used for vacations now and retirement later. Interest runs along all price points, from distressed properties that can be fixed up and rented out to seven-figure mansions.

What about the properties that cost less than a million dollars? They still exist In Manhattan and many weary renters are bolstering the sales - Studios and one-bedrooms are in demand.

With Manhattan rents at historic highs, tenants are moving out of rental markets and into new homes. Much of the new activity is taking place at the bottom of the market, as first-time buyers growing weary of the rental market buy studio and one-bedroom apartments. Whereas rents continue to break previous records, the Manhattan sales market has shown stability, with mortgage and interest rates declining to all-time lows.

Rents reached an all-time record in July, with average Manhattan rents reaching $3,459, the highest since 2002, and as landlords continue to raise rents, young professionals, pied-a-terre purchasers, and parents buying homes for college-aged children are looking to become first-time buyers.

But, because mortgage lending and underwriting has not eased, it has actually prevented a housing boom of even greater proportions. Experts also caution against buying on impulse, even in the case of a credit-worthy, financially stable buyer. Potential buyers should assess their individual circumstances before jumping into a long-term commitment — especially if they don’t plan to settle down in Manhattan for several years.

The cost of renting vs. buying also depends heavily on the individual property. In addition to mortgage payments, maintenance fees and deposits (typically 20 percent of cost in Manhattan) should be considered when looking at a purchase option. If it’s a longer term plan, purchasing may be the right thing to do.

Please contact Haute Properties NY with any questions regarding buying or selling your new home.

CATHERINE ANDRUSENKO, FOUNDER Catherine has global expertise, professionalism, and a reputation for exceeding excellence. Her eye for detail and knack for creative design are the unique qualities most of her clients appreciate, especially those needing renovations or designing their dream home. Fluent in English, Russian and Latvian, she also speaks Spanish and is able to make both international and local clientele comfortable in any language. Whether someone is moving from around the globe or across town, looking for an investment property in NYC or Miami areas, buying or selling their home; she relates to people of all kinds and effortlessly fulfills their diverse real estate goals. Due to her background in service industry, Catherine is a firm believer that the customer comes first. Originally from Riga, Latvia Catherine has always been independent and passionate about entrepreneurship. She obtained her B.A. in Business and Marketing from the prestigious RISEBA (Riga International School of Economics and Business Administration) while simultaneously pursuing her career full time. A trip to Manhattan made her realize the Big Apple was where she belonged. New York City became her home away from home, as her energetic nature, upbeat and infectiously positive attitude perfectly matches the pace of NYC. Catherine decided to pursue a long time passion for Real Estate and Investments and founded Haute Properties NY in 2011. The next step was partnering up with Keller Williams NYC, ranked as #2 in the Nation and #1 in Manhattan by Real Trends & the Wall Street Journal). Catherine enjoys working in all areas of Manhattan and is motivated by the city and its diversity. She works closely with her clients to carefully determine their needs, educate and guide them towards the right decision every step of the process, while making it completely stress free. Her fascination with interior design helps when staging an apartment for sale or decorating after the move in. Catherine’s honesty, integrity, can-do attitude and engaging personality are what earns trust. Extremely organized, she returns a call within minutes, and e-mails even faster. Catherine believes in continuing education indefinitely – she constantly attends numerous business and real estate seminars. She is a member of REBNY, Savor The Success- Business Network for Women Entrepreneurs and National Association of Professional Women. She also finds time to volunteer for multiple charitable causes.