A
Hurricane of Support

As I was searching for volunteer opportunities I came upon a Facebook post from a chef friend George Mandakas. He was organizing other chefs who wanted to contribute to the Sandy relief effort by cooking for those in need. His group is called Storm Chefs and it was the perfect fit for me!  It just takes one person to make a difference!!

I wrote a blog last week about wanting to volunteer, and within a few hours I was contacted by my longtime friend, Janet Mick. Janet owns IT Management, a public relations firm that works with top restaurants and hotels around the world. Because of her contacts she was able to procure some terrific donations of food and wine.  Janet’s husband Lou Ramirez is a partner in Maison Kayser, a new boulangerie in Manhattan,  and they graciously donated bread for our efforts. 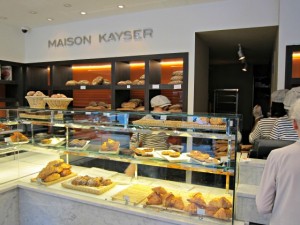 Chef George really took the ball and ran with it. He encountered a huge amount of red tape trying to get a space to work out of in the Rockaways or Staten Island, but he finally found a spot in Jersey City.. a church where we could set up, cook, and serve.

He procured donations from local farms and meat purveyors, and Whole Foods stepped in to help as well.

On Monday morning, Janet, Lou, my French friend Zilia, and I all piled into a rented van, because we didn’t have our own transportation or gas, and made our way to Jersey City. Our driver had no idea where we were going and finally with the help of Google, we made it to St. Paul’s Lutheran Church. We were a little late, but it didn’t matter. George had the kitchen set up already. It was still early but the smell was intoxicating! Marinted rosemary chicken breasts were on the grill, as well as four huge filets of beef. In addition there was pork roast, turkey, and meatballs. We made vegetables from the local farms; chard, carrots, turnips and sweet potatoes…. simple flavorful food.  Chef George did an incredible job of organizing our kitchen for maximum results.

Being in that kitchen, working with a large crew again, reminded me of my catering days and the bonding that happens over preparing good food. We sliced and sautéed for hours and the final meal we prepared was amazing.

We had enough left over for two more meals, so the Red Cross picked it up to bring it to other shelters. The Mayor of Jersey City, Jerramiah Healy, even stopped by to say hello to us!

My assistant Jessica also volunteered in Queens where she grew up. Her tales were heart breaking. Thousands of men, women, and children with no roof over their head.. and for the lucky ones who do still have homes, no power or heat. The children and elderly are shivering and beginning to get sick from the cold. It is truly a crisis that we are dealing with in New York City. Take a look at some of Jessica’s pictures from Far Rockaway…

Jessica and her husband feel so strongly about helping out, they have created a Pay Pal account to raise funds for the Rockaways and affected areas after witnessing very little assistance coming from the Red Cross. They are using the donations to directly purchase emergency supplies and distribute them to families in need. If you would like to contribute, their Pay Pal account is Homemadenyc@gmail.com.

The Staten Island Borough President went so far as to ask people to STOP contributing money to the Red Cross. Read more about that Here. It will take years and billions of dollars to rebuild after Sandy.

I hope that we all come together and do what we can to help our neighbors.

Pamela Morgan is the owner of Flirting with Flavors Inc. She is highly regarded as a special event planner, culinary consultant, cookbook author, and culinary instructor. She currently holds the position of food & entertaining editor for Hamptons’s Cottages and Gardens. Pamela is a member of Les Dames D’Escoffier, a leadership organization headed by women noted for their success in the culinary profession. Her cookbook, Pamela Morgan’s FLAVORS, written with Michael McLaughlin (Viking) was published in May 1998.She is married and lives in New York City and teaches her studentshow to spice up their relationships through the art of cooking. She has appeared on The Housewives of New York, Fox and Friends and WCBS News. 25 East 67th Street 8B New York NY 10065 (917) 612-6161 (Cell) (212) 647-1234 (Off) (212) 674-6513 (Fax) www.flirtingwithflavors.com